Hello eveyone!  And welcome to the new year!  I am so excited to see what 2017 has in store for me!

Speaking of stores…have any of you been to Hobby Lobby?

If you have, you can completely understand what I am talking about.  If you haven’t, then you might understand after this post.

Now, I just recently moved into a new place with someone I met on Craigslist.  Long story short, she is probably the best roommate ever because we are so alike.  We have so many similarities, it’s scary.  Oh well, Amber is awesome!

Except that she mentioned that she had never been to Hobby Lobby.  And I had to change that immediately.

So we made a pit stop at Dutch Bros Coffee (we are part of the Dutch Mafia lol) and continued to Hobby Lobby. 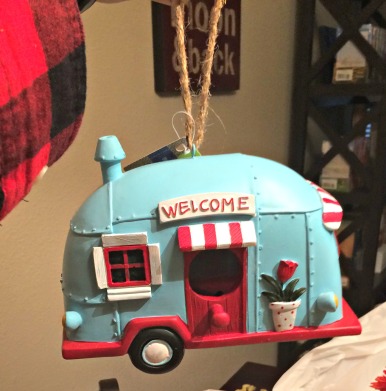 First of all, how awesome is that flamingo wind chime????  I said that if we were doing the camping/trailer theme, we had to get a flamingo of some sort.  And this one is adorable so why not?  And the camper bird house?  ADORABLE!  We also bought some geckos to hang on the fence.  They were so cute we couldn’t pass it up.

And finally I bought this sign for my crafting area.

Now I don’t normally plug my own stuff, but I want to tell you about my Etsy shop.  I started a shop called BlitzyBlingArt where I have stuff that looks like the British flag that I blinged out last fall.  If you want to check it out, that would be great!  I try to post stuff regularly to let people see what I sell!

Thanks for stopping by!

Now the dogs have there own campfire when we go camping!! Thank you Lauren Smith